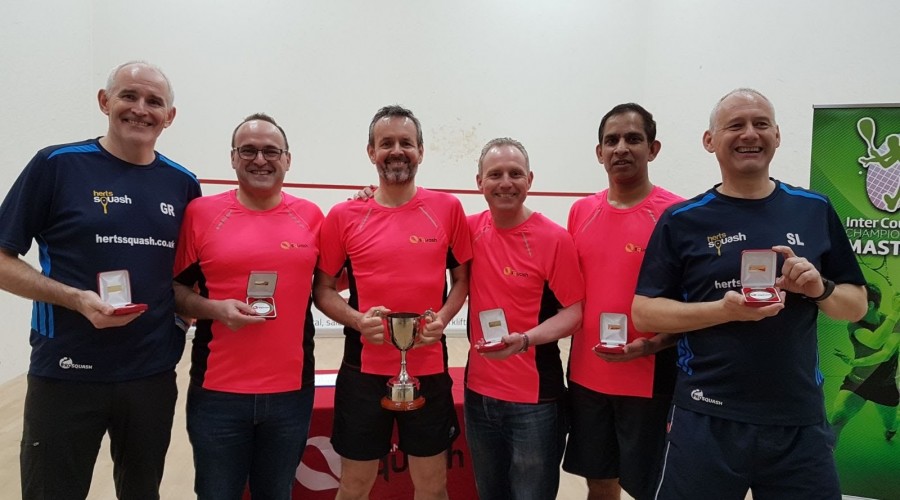 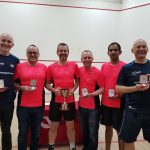 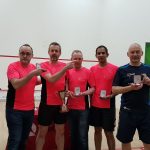 The Herts Mens Over 50 team embarked on the trip to the impressive Nottingham Parks Squash Club with the objective of retaining their National title.

The semi final resulted in a comprehensive 5/0 victory over Essex with the only concern being a left calf strain for Marvin Rust during a combative 3/1 win, including various comments about visits to A & E. Steve Lloyd and Andrew Eilfield had got us off to an important good start with convincing 3/0 wins at 5 and 3.

In the other semi, a strengthened Bucks side took out last year’s runners up, Surrey, in a tight 3/2 win, with all matches extended to 4 or 5 games.

We then checked into our hotel with selection concerns for the final. Having been directed to the far queue, we had also to overcome some “one key or two key” questioning for our twin rooms…

A country and western themed dinner followed with Mike Richards winning the condiments challenge…or was it Marvin….or Las?

Recent National semi finalist, Gary Raw, was called upon to drive up and play at 4 for the final, although recovering from a hip injury, and Marvin Rust passed a Sunday morning fitness test to take the 5 slot.

Going on first at 5 and 3, Marvin and Andy both lost tight first games before pulling ahead 2/1. Disaster then struck Marvin as his opponent collided heavily with his uninjured right calf, resulting in the match being awarded to Bucks and Marvin unfortunately having to make the trip to A & E after all.

Andy was taken to a fifth and a 2 match deficit loomed as he tired and his opponent got an early lead. Somehow Andy turned it around and won the fifth 11/8……1 – 1.

At 1, Eamonn then came through a tie break first game and close 2nd and 3rd games for a tough 3/0 victory over Phil Yerby …3 – 1 Herts retaining the National Title..

Objective achieved and National Title retained, but not without key contributions from Mike Richards and Martin White in the qualifying round and as squad members.