Nevil Rimes will be retiring from GSK in September this year and has been honoured for his contribution to squash at Allenburys.

The Allenbury squash courts have been named after Nevil (Nev) Rimes in recognition of his many years of service to the squash section at ASSC.  Nevil worked at GSK and legacy companies for 40 years.  Throughout the majority of this time, Nevil was a leading member of the squash section actively playing in the internal leagues and for 25 years also represented ASSC in the Herts County Leagues.  As well as being an active player, Nevil also oversaw organisation of the internal leagues for 22 years, between 1995 to 2017.

Congratulations Nevil and wishing you a happy retirement! 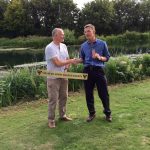 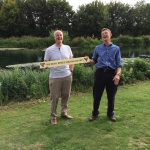