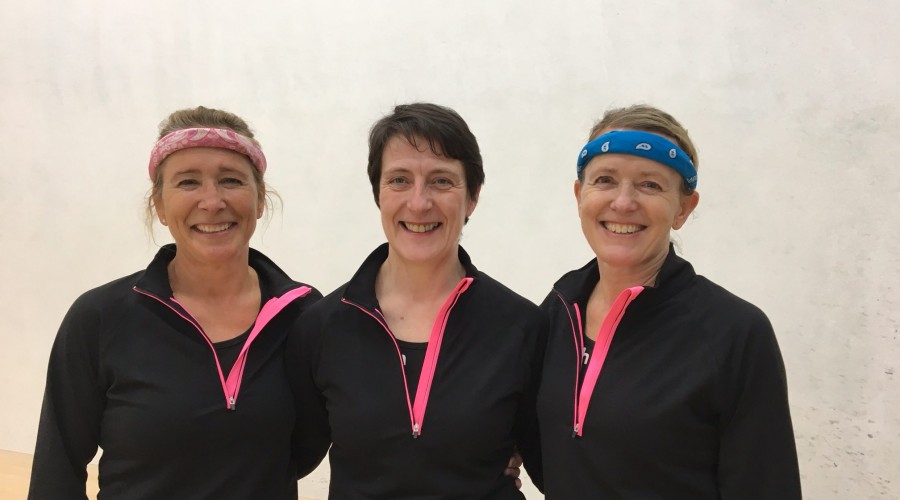 Herts Ladies O50’s travelled to Pontefract with high hopes and determination to do well. In Stage 1 and Stage 2 of the championship they had come across Kent. In Stage 1 they had lost 2-1 in a close fought match but in Stage 2 Kent had strengthened their team and beat Herts 3-0.   You can imagine how the ladies felt when they found out they had to play Kent AGAIN at the finals weekend, not really a balanced tournament!

The ladies were positive though and determined to give it their best shot.   Sheila Blake was first on against Karen Hume, current World O55 champion. Sheila, who is still getting back to fitness after an ankle injury tried her hardest but could not overpower Karen and lost her match 3-0. Next on court was Maureen up against Mandy Akin, a seasoned England player. Maureen played extremely well, just losing the first game 15/10. Maureen came back strong and won the next game 15/11 and she was close again in the third losing 17/15 and then eventually losing the fourth game 15/13 and the match 3-1. This meant Kent had already won the semi final but Isobel went on wanting to do better against an opponent she had struggled against in the past.   She lost a close first and second game and somehow found the will to win the third game 15/11 but her opponent was just too strong winning the fourth and the game 3-1.