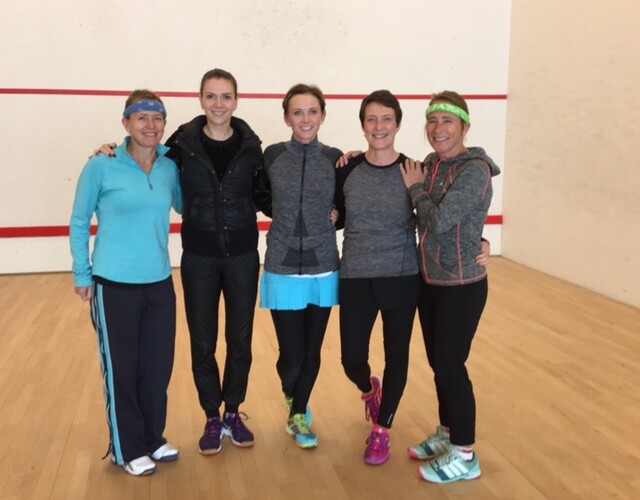 First match was against the hosts Essex.   Isobel and Sheila getting the team off to a good start winning both their matches comfortably, then Maureen and Louisa’s turn to win their matches also.   Libby was last on court and had a great battle with the Essex No.2 but came out on top winning 3-1 and the team winning 5-0 –  The match was over fairly quickly as England Squash have also changed the scoring from the HiHo scoring to 9 to PAR 11!   Therefore time for coffee and biscuits before our next match against Surrey.

Surrey a much stronger county, Herts had to be on their toes right from the off with the new PAR 11 scoring.  Isobel and Sheila on first again.    Sheila started well levelling the match against Helen Dredge at 1-1 but couldn’t quite keep up the momentum losing 3-1.  Isobel also played well, but could not get past her steady opponent, Vicky Strange,  losing 3-0.  Maureen  and Louisa then went on court.  Maureen played some great, steady squash securing a victory for Herts winning 3-0 against Cath Monday,  but unfortunately Louisa’s opponent, Shayne Baillie, was too strong, and although Louisa had her chances in the third game, lost 3-0, not through lack of effort though. Last on again was Libby who narrowly lost out on winning the first game and eventually succumbed losing to Isabelle Tweedle 3-0.